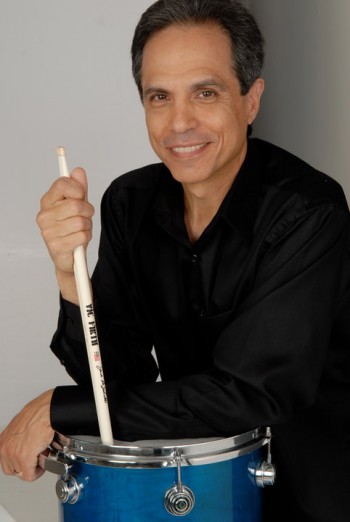 My interest in drumming started when I saw Count Basie’s band on the Ed Sullivan show. I remember being captivated by the sound of the band and the force and motion of the drummer (Rufus Jones). Midway through the performance, I turned to my mother and said “I can do that” referring to the drums. I was 11 years old. I didn’t think much about drums again until a year later. That was February 9, 1964, the evening the Beatles performed on the Ed Sullivan show. I knew from that point on I wanted to be involved in music. By the time I was thirteen I was taking drum lessons at a local music school in the Bronx, had a Kent drum set and some off brand cymbals, and did my first professional job. New York City was a great place for music during the 60’s.

While I was cutting my teeth playing in local bands, I would go to the Fillmore East to hear the great acts of that era. There were also many clubs in the East and West Village where music was pouring out. The great drummers who stood out to me at that time were Carmine Appice, Ginger Baker, Dino Danelli, B.J. Wilson, Max Roach, Art Blakey, and Buddy Rich. Everything I saw and heard had an influence on me.

The best part about New York City at that time was that almost every night club had a band stand and live music several nights a week. There was enough work to go around for all types of musicians. To perform in these clubs while getting paid was invaluable experience for me. I just had to hide my age or someone in the band had to be 18 years old so I didn’t get thrown out. There was also a lot of studio work for demos, jingles, and records that used live drums. Unfortunately the live music and recording scene does not exist for young musicians these days as it did then.

I took a detour from music when I was faced with being drafted to serve in the military during the Vietnam War or go to college. I opted to give college a try. For some reason, I never thought about studying music during college until my last year when I took a big band performance class. I decided that last year to finish college, go into music full time, and not look back.

I also decided to study privately again. I knew I went as far as I could on my own and needed expert guidance and fast. I had lost a lot from not practicing much during my time in college. I was referred to Joe Cusatis.

I studied with Joe for five productive years. Joe is a great teacher, master technician, and consummate drummer. He helped me develop my professional skills. In my first lesson Joe told me, “If you want to be a professional, you had better practice as much as you can everyday or else don’t set your sights on a career in music”. He was right and I tell my students the same. One day Joe told me, “I can’t teach you anything else, go out and play”.

While living in New York City, I did a season as show drummer for The Jerry Lewis Theater Club in the Catskill Mountains backing up many name acts. While working there I was hired to perform in the film “The Front” backing up Zero Mostel’s live performance. I also did some recording work for song writers.

I went on to serve as house drummer at The Jazz Mania Society in New York City during it’s start up and performed at such famous night clubs as the Village Gate and Jilly’s. While at Jilly’s I backed up Pat Galo and I met Frank Sinatra there. Frank was a wonderful man and treated the musicians in the band with great respect.

I toured for a year with legendary rhythm and blues recording artist Brook Benton. After that, I stayed home and performed locally in and around the tri-state area.

I moved to Los Angeles in 1987. Since moving to Los Angeles, I have had the great pleasure to perform with such artists as Sammy Davis Jr., Ben Vereen, Steve Allen, Linda Hopkins, Isaac Hayes, Patti Lupone, Clint Holmes, Maxine Nightingale, Edgar Winter, Chaka Khan, Mark Isham, Taylor Dane, Pat Tuzzolino, and many more. I have also appeared at many local night clubs with my own bands as a leader.

Shortly after I moved to Los Angeles, I hooked up with Jamie Faunt and taught his Rhythm Courses. I found Jamie’s courses to be a an excellent method of teaching the fundamentals of rhythm. I taught Jamie’s courses along with my own methods of technique for the drum set to Jamie’s students for twenty years.

I actually began teaching thirty years ago. Drummers would ask me to teach them after hearing me play. I would turn these requests down until I realized I had an obligation to pass on what I was taught and what I had gotten from music.